For a country with a rich musical heritage and fascinating mythology, it seems only fitting that Ireland’s national symbol is the harp.

Ireland is the only country that has a musical instrument as its national symbol; what an opportunity for a nation famous the world over for its music, culture and dance. Intertwined with notions of Irish identity, it is found on official documents, the Irish passport, currency and every pint of Guinness and Ryanair plane, two of the most instantly recognizable Irish brands.

The history and significance associated with this instrument is fascinating, with origins in ancient traditions, and most amazing of all, the fact that Irish harp music has been passed down from generation to generation without sheet music being widely available. Traditionally learned by ear, this challenging but rewarding instrument has a touch of magic.

Listen to this Irish harp playlist as you read on:

The harp in mythology

The harp is said to have been invented by the goddess Cana Cludhmor, the Gaelic goddess of dreams, inspiration and music. The legend says that while walking on a beach one night, she will fall asleep to the sound of beautiful music. Upon awakening, she realized that the music had been created by the wind blowing through the tendons attached to a whale skeleton washed up on shore, and this inspired the design of the harp.

Dagda, the god of fertility and agriculture, had a magic harp made of oak and encrusted with jewels. He was the leader of the Tuatha Dé Danann, an ancient semi-divine race that ruled Ireland thousands of years ago. His harp invoked the seasons of the year when he played it. He carried it everywhere with him, and it flew into his hand when he invoked it. Those who heard him play were enchanted by one of three types of music he played – either to laugh with joy, or to cry with grief, or to fall into a deep sleep. This remains the basis of three types of tunes for the harp: Goiltai (lamentations), Geantrai (celebrations) and Suantrai (lullables).

A harp played in the street at the Fleadh Ceoil 2013.

Goiltai, Geantrai and Suantrai were also the names of three sons born to Uaithne, a bard of Tuatha Dé Danann and his wife, the goddess Boann, reflecting the music he played to her while she was giving birth. All three sons also became skilled harpists, each playing the type of music associated with their name, on elaborately decorated gold and silver harps.

The goddess Aibell was also famous for possessing a magic harp. She was a goddess of love, of the untimely death of lovers, and of prophecy, and her harp was a harbinger of death – anyone who heard her playing would soon die. Legend has it that she visited the great warrior-king Brian Boru, on the eve of his death in the Battle of Clontarf against the Vikings in 1014.

Brian Boru played the harp often during his lifetime, and the harp, commonly known as the Brian Boru Harp, on display at Trinity College was long thought to have been his: legend has it that his son Donnchad presented it to the Pope when he traveled to Rome to seek absolution for his brother’s murder in order to take the throne. It is then said to have been later presented to Henry VIII as a gift in 1521. However, historians place its origins in the 14th or 15th century, with its carvings showing similarities to the Queen Mary Harp of that period in the National Museum of Scotland.

The harp in Irish history

From medieval times until the 1800s, the harp was central to Irish court life. Under the Brehon system, the harpist was a central figure in the court of every Irish king or chief and granted him special status.

In 1531, King Henry VIII of England declared himself King of Ireland and colonized the country. Although he recognized the central role of the harp in Irish life and culture and named it the official emblem of the kingdom, the harp tradition began to decline steadily after colonization. With the overthrow of the courts of the High Kings and Irish Chiefs, harpists lost their special status in society and had to become wandering musicians. Over the years the harp became a symbol of resistance to the Crown and was eventually banned. In 1603 Queen Elizabeth I decreed that all Irish harpists should be hanged and the harps burned.

Somehow the harp tradition survived. A harpist named Turlough O’Carolan, who lived from 1670 to 1738, was one of the last of his time to compose new harp music. Most of his compositions were not written or published during his lifetime – they survived in the repertoire of other musicians. Like many harpists of the time, O’Carolan was blind; this was thought to be due to diseases such as smallpox and measles being rampant. O’Carolan is considered by many to be Ireland’s national composer; the annual O’Carolan Harp Festival in Co Roscommon commemorates his life and work. 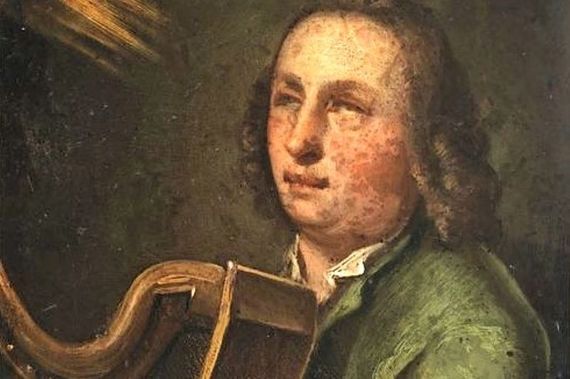 The Belfast Harpers meeting of 1792 attempted to keep the waning tradition alive. Edward Bunting, a young organist, had been hired to transcribe all the music played, as the Irish harp is traditionally learned by ear, rather than played from sheet music. He continued this endeavor throughout his life and the Bunting collection is now infamous, as a document of traditional tunes. The Chieftains’ 1993 album “The Celtic Harp”, which won a Grammy Award for “Best Traditional Folk Album”, is a tribute to Bunting’s work.

In another effort to keep the harp tradition alive, an Irish Harp Society was formed and a harp school for blind boys was established. In 1794 Padraig Dall O’Beirn (Patrick Byrne) was born in Monaghan to a poor, Catholic, Irish-speaking family; he went blind from smallpox when he was just two years old. After attending harp school he became one of the most acclaimed musicians of his time, appointed Irish Harper to HRH Prince Albert in 1841 and was dubbed “the last of the great Irish harpists”. He was also the first traditional Irish musician to be photographed, while in Edinburgh in 1845. His death in 1863 marked the end of the old style of playing. The Féile Patrick Byrne festival is normally held the week before Easter at Carrickmacross.

The instrument itself has evolved, in terms of construction, size and composition, over the years. For nearly a millennium the harp had changed only organically, but in the 1800s harp maker John Egan brought about sweeping changes and innovations. The modern Irish harpist (as opposed to a harpist, who plays a pedal or concert harp), plays in a different way from his ancient ancestors.

Traditionally, the strings of the Old Irish Harp were made of brass and plucked with the fingernails, the hand held as if closed around an imaginary ice cream cone, producing a clear, high-pitched sound. The harp was played seated against the left shoulder. The resonating chamber would have been carved from a single log of wood, usually willow, although Dagda’s harp would have been made of oak. Today, the harpist plays the harp on the right shoulder, and strikes the strings with the pulp of the fingers, thumbs up, fingers down.

Reviewing Mary Louise O’Donnell’s 2015 book ‘Ireland’s Harp: The Shaping of Irish Identity’, Siobhán Armstrong, founder of the Historical Harp Society of Ireland, points out that ‘there is not just one’ Irish harp tradition’ but a more complicated overlap and juxtaposition of older and newer traditions”, taking into account the different styles of Irish harp which have evolved into that generally accepted today.

The most famous existing harp in Ireland, the so-called Brian Boru Harp, on display in Trinity College Library, serves as the model for the Irish state insignia, as well as the famous Guinness logo. While its origins are shrouded in debate, it is known to have been presented to Trinity College, Dublin by William Conyngham in the late 18th century, and was restored by experts from the British Museum in 1962. It made the object of a dramatic theft in 1969. . 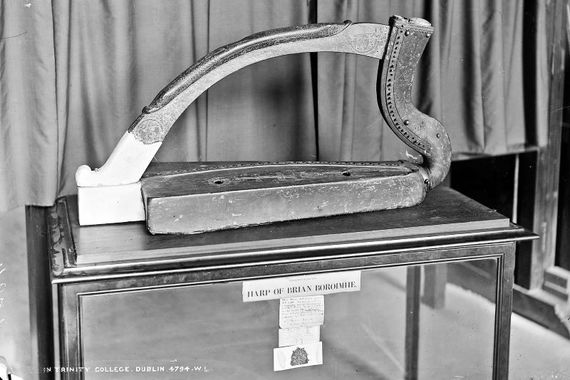 Joseph Brady, a former British soldier, was recruited into the IRA in 1967 and had the idea to steal the valuable medieval manuscript of the Book of Kells and hold it for ransom. After breaking into the college and finding himself unable to access the Book of Kells, he took the harp instead and demanded a ransom of £20,000. A meeting point was arranged and a spectacular sting operation ensued. The culprits were apprehended, the harp, wrapped in black plastic, was recovered from a sandpit near Blessington in County Wicklow.